Globalization emerged to many Western business conglomerates as a long sought-after opportunity that they have been eagerly waiting for. In the 80’s and 90’s, globalization was the main contributor to the reduction of manufacturing costs for the Western companies who sought to transfer low-tech manufacturing to the Asian region; and at a later stage Eastern Europe to have a very broad manufacturing footprints. On the other hand, it's also been an opportunity for those countries that were eager to build their infrastructure and to enter a world of competition and growth.

However, globalization has democratized knowledge, eased and accelerated the processes of knowledge transferand exchange of experiences with these countries. The upshot was the emergence of several local and low-cost manufacturers who targeted the low-end customers that were overserved by western products.

These emerging low-end competitors paved the way to the creation of advanced local manufacturing, which took roots towards the end of the 90’s in China, India , and East Asia. In the following decade, many of these local industries was able to produce “good enough” products to compete on the regional and global scale. This had a consequential impact on the world's major incumbent corporations, not only by losing several markets that reduced turnover and squeezed the profit margins, but also by becoming a direct threat to their core markets in Europe and America, as well as the more traditional markets in Latin America and the Middle East.

Intercontinental manufacturing industry conglomerates such as Siemens, General Electric, Mitsubishi, Alstom, or ABB Group, have never experienced any existential danger as they do today in the basic technical industries, which are currently in the efficiency phase. While global market competition, three decades ago, was confined to these companies, there are now in excess of 50 competitors in each industrial sector. For the last decades, the incumbent corporations were focused in Sustaining Innovations High-End-Strategy, while most of their current competitors have emerged by applying the low-end disruption strategy. Most of these competitors are local producers who are capable of producing “good enough” products at low manufacturing costs due to their simpler structures, focused strategy, and the availability of cheap labour. Nowadays, there is a very minimum differentiation among producers. As a result, most products have become commodities. All producers compete on the  speed to market, price and flexibility.

On the long term, this will cause incumbent companies to lose their market share in their core markets, unless they can create innovative solutions and ideas to reduce their costs, and to differentiate their products over their emerging competitors.

How to face these challenges:

Globalization itself carries some of the tools that can help today’s leading corporations to maintain their advanced position in the world that was created by globalization. In the following, I introduce four concepts on two levels: The strategic level and the operational level. Each of them could be discussed in depth in  a separate articles, but for the time being, this blog will review the essence ideas.

On the strategic level:

Incumbent corporations are facing nowadays the challenge of accomplishing a paradigm shift. The current paradigm that has prevailed over the past two decades is based on structuring and leading an international conglomerate in a similar way to leading a governmental structure: Central planning, hierarchical levels, long response times and well compartmentalization.

In a world that is dominated by online markets and social media, our perceptions of the lead and response times have changed dramatically. Customers have become impatient and very demanding.

Furthermore, the number of political and economical players who can impact and affect our business environment, have increased greatly.  This has changed to the  extent which impacted the stability these companies enjoyed over the past few decades.  The central long-term planning based on history can not deliver the desired results any more. 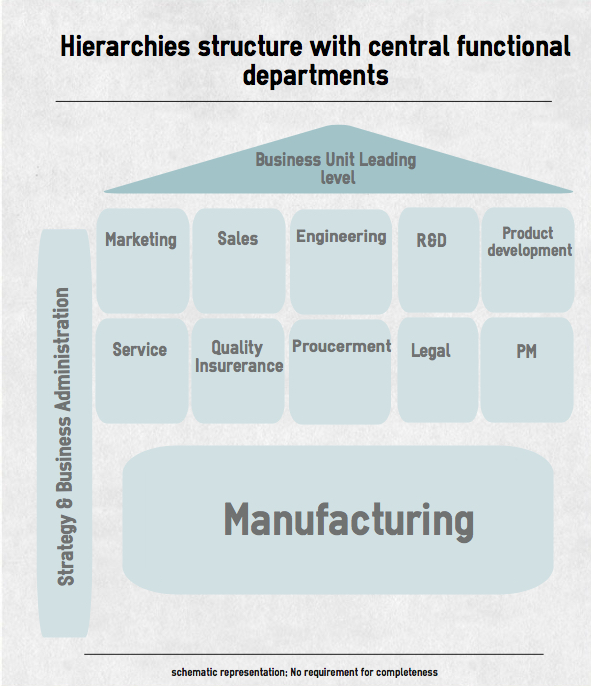 On the other hand, figure B illustrates the new suggested paradigm: Flat and responsive hierarchy with several cross functional teams 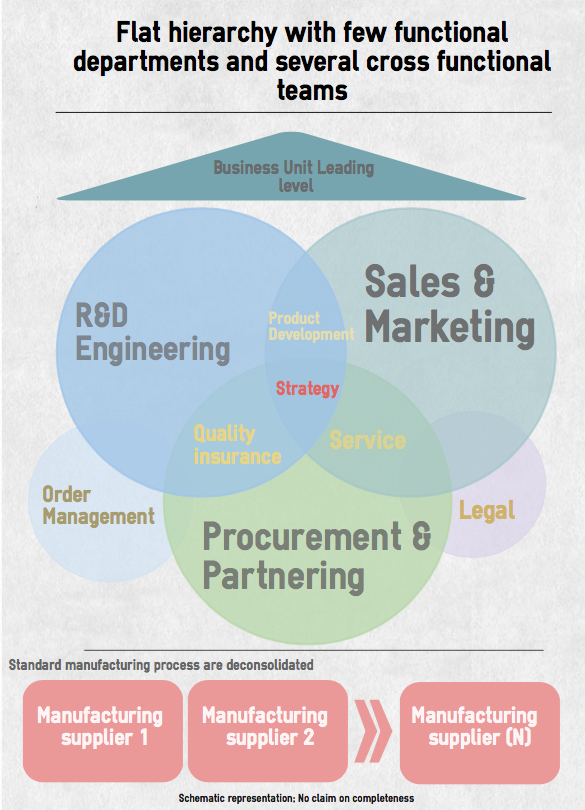 These challenges force companies to abandon the centralised functional organizations that are depending on long-term planning  that is based on the historical data, and instead, create multi-functional and non-hierarchical agile teams that have the flexibility to rapidly and continuously respond and re-adapt to the different changes in their environments in order to capture emerging opportunities out of economic, financial or even political change. Rebuilding the business process to reflect the customer's needs and flexibility expectations, rather than the internal organizational efficiency has become crucial to survive in our tough market conditions.

Summarized: Response-driven organizational structure: Multi-competence, non-hierarchical teams, that are more flexible than central and hierarchical functional organizations. This will be the secret answer to succeeding and adapting to a world that is ever changing, and at a speed we have never been used to.

Henry Ford once said, "If I ask my customers what they would wish for, they would answer; a faster carriage and with more horses,". However, Ford was able to solve the transportation problem in an extraordinary way by inventing the people’s car, thus creating a new market for Ford to sit on its throne for decades to come.

In his book “Blue Ocean”, Prof. Chan Kim proposes to create new markets instead of struggling against competitors for market share. Finding new ways to solve problems or “getting the customer's job done” willcreate new markets with new opportunities.

Incumbent companies have the best chances to invest in inventing new demands and creating new markets, because of their advanced experience and knowledge position;  also, because of their financial and human resources capacities that are not yet available to new competitors.

Nevertheless, creating new markets requires companies to provide environments for innovations and creativity that allow rebellious minds and personalities to flourish rather than be suppressed. As the humongous bureaucratic machines that control large companies, they tend to limit possibilities of creativity and grind rare personalities, rather than make the most of their diverse views view of the world.

On the operational level:

Professor Clayton Christensen from the HBS suggusts, to escape commodity trap you should find out the so-called performance-defining component and focus on it. Rebuilding the business process around the performance-defining component would deliver differentiation and make it difficult for competitors to imitate. The component could be the research and development, which could mean that the product to preserve and develop is the manufacturing licenses or patents. Or it could be a complex manufacturing process that depends on a unique expertise and knowledge. It may also be the unique design and assembly process as is the case with Apple's smart phones.

However, it is certain that European and American companies will find it difficult to retain the complete production and manufacturing process in their home because of their limited ability to compete with the manufacturing costs of their emerging competitors in Asia and in East Europe.

The value-added element that Apple provides in its products can be summarized in the unique design, R&D, high quality, and marketing. Meanwhile, the manufacturing and assembly processes are carried out in different factories in China, and their costs are subject to market price.

In many Western countries, it would be difficult to close locations or move manufacturing to low loan countries. But deconsolidation of manufacturing fixed assets does not necessarily mean closing production or laying off employees.

In fact,  it could mean floating the production division to receive manufacturing orders from all the customers in the market, including competitors. This will consequently result in the reduction of manufacturing costs to a competitive level, in addition to removing the parent company’s burden of operating and maintaining these manufacturing capacities. In result, this will help to allocate the resources in such a way to focus them on developing value-added driver components.

This idea is also illustrated in figures A and B above.

As for the manufacturing workshops, they will work on growing their customers base. Adopting such a different business model is not an easy process and will create new challenges that will require restructuring within the organisation.  However, it is still a better alternative for closing locations and mass layoffs.

The coming years will bring tremendous existential challenges for incumbents companies that are largely caused by the widespread of technology, knowledge and ease of communication, which has led to the emergence and development of new competitors at unprecedented levels. However, these incumbents companies possess great opportunities to retain the leading position in the global market, if they play their cards right. The above article suggests a few useful ideas in this respect. However, the four ideas discussed above should be considered as one package and should be applied at the following levels: The corporate culture and its hierarchy and organizational form; and at the strategic level where the companies should move from  market defending strategies towards market creating strategies; finally, at the rationalization the operatioal level.

In conclusion, "Success  yesterday and today is no guarantee for the future." Sustaining success needs an appropriate response and continuously adapting to every change in the business environment. The response and the adaptation should be faster than the change cycles.

This response and adaptation need an appropriate corporate culture and an enabling organizational structure.

It was also published on Linkedin on December 11, 2016